I went on a sketch trail to Bandipur forest. I stayed in the bungalow located within the reserve forest, for three days. Herds of deer grazed the backyard of the guest house, there were tales of tigers and leopards being spotted. An elephant camp was next door, from where a tusker, a mother elephant with her calf that was only five days old ambled to the watering hole located beyond the bungalow.

I was out through the day, painting and sketching. I painted most of these at the sites, many of them done as wet on wet style.

I have been dedicating most of my time to writing, and have not been painting much. Filled with guilt I filled my book with these paintings and sketches. I had a lot of time to be by myself and reflect. I have emerged out of the forest with a resolution that I will remain balanced in 2015, I will paint as much as I write. 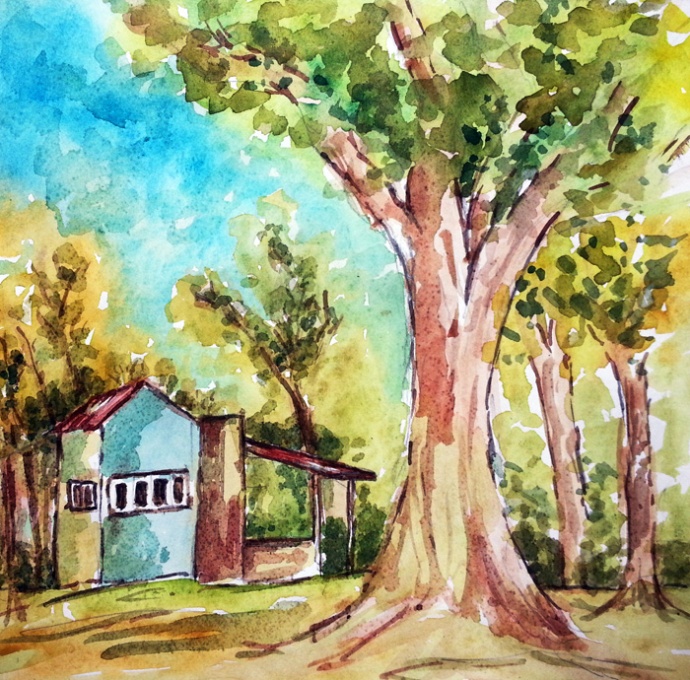 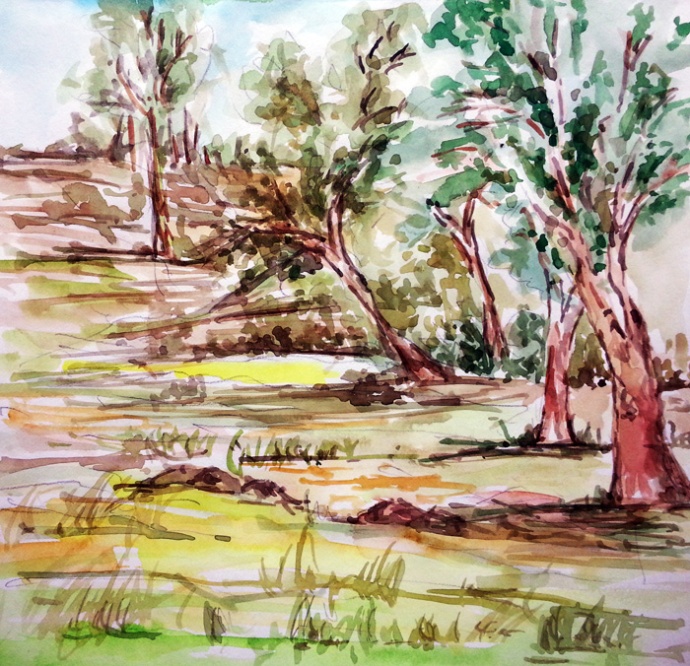 The sun played hide and seek the afternoon I visited the Theosophical Society . The rains had washed clean the leaves and the branches were heavy with moisture. I was glad for the few hours of sunshine, the rich light that filtered through the foliage  appeared surrealistic.

During my previous visit to the Society I caught a glimpse of Blavatsky Bungalow through the the dense spread of the large banyan tree.  During this visit I did not even know that I was moving towards the bungalow because I came upon it from the other side. I found an old building impressive with tall pillars, doors painted blue , and light bounced off the lime washed walls.

I walked around the building and suddenly came upon this sight and only then did I know that this was the Blavatsky Bungalow I saw from the other side of the banyan tree.

This building is one of the oldest in the Society, I came across a plaque that stated that Rabindranath Tagore stayed in the bungalow in the year 1934. The rooms were locked and there was no one anywhere close to the building. I sat on the cool portico and sketched. I sat in silence drenched by the prism of light and thought of the silent march of the banyan tree close and closer to the building . On the left flowed the Adyar river, the path leading to the river covered with brambles and weeds.

George Arundale (1878-1945) was the president of the Theosophical Society, Adyar. He was married to Rukmini Devi who was a pathfinder in the classical dance form of Bharatanatyam.

There is a house in the Theosophical society named after Arundale, it was probably here that the celebrity couple who made history in their own fields, lived. It is a beautiful old house shaded by trees, not very far from the Adyar river. The river at the back yard, the sea not too far might have offered a rich environment for creativity to blossom. It might have been the place where dreams were born,  the Arundales have left behind a world class academy for performing arts and music in Kalakshetra.

I did the sketch of the Arundale house on a brick red tinted paper, mainly to capture the old world look of the place. 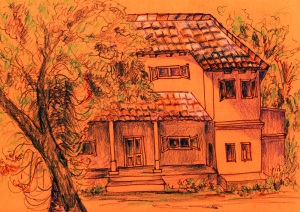 I was captivated by this arch of creepers outside a fairly new building that is the administrative block of the Society. I have used green tinted paper to minimise work on creepers and plants.

The word ‘vaatsalya’ in Sanskrit means love, affection, tenderness, fondness; this word is used to describe a mother’s love for her child. The banyan tree embraces, like a mother with hundred arms, her brood of children. It wrapped me into this embrace of life.

The banyan tree (Ficus benghalensis) at The Theosophical Society in  Chennai, spreads across 60,000 square area and is some 450 years old. Growing on the banks of the Adyar river, not too far from where  the river drains into the Bay of Bengal, this banyan tree has had its tryst with history. In the Blavatsky bungalow that is nearly strangled by the colony of roots of this tree, stayed Rabindranath Tagore; the  tree has extended its hospitality to several other luminaries too, like J Krishnamurti, Annie Besant and Maria Montessori. 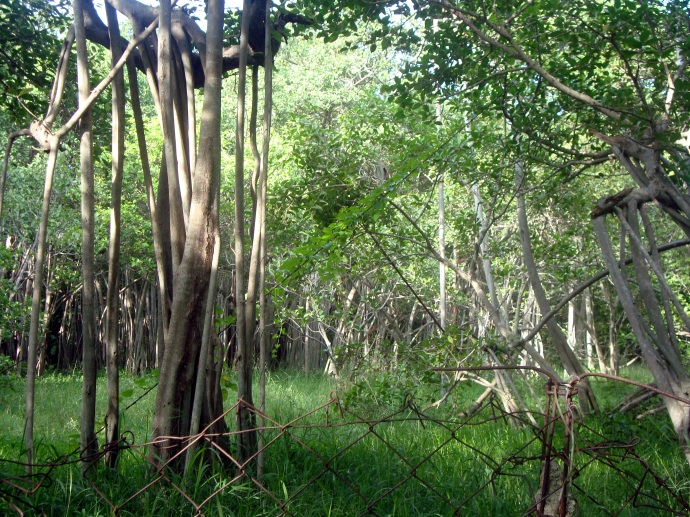 The tree with its immense settlement of aerial roots and its extensive green canopy has a presence that has to be experienced. The main tree was uprooted by gale in 1989 and efforts made to root it back failed. There is a hollow now where there was once this immense trunk. The aerial roots that have come from the mother tree, have put out branches and spread the canopy around. This is a clonal colony carrying  memories of the mother tree in their fibers of existence. 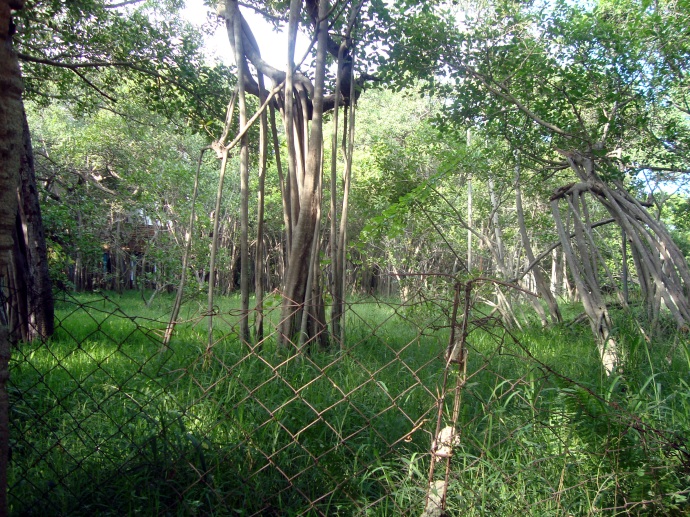 There are several banyan trees in The Theosophical Society. I spent two afternoons sketching some of the trees. Here is one of them, that I have drawn using 9 B lead pencil.

This is the old tree I have written about. I used tinted papers and soft pastels for these two sketches. 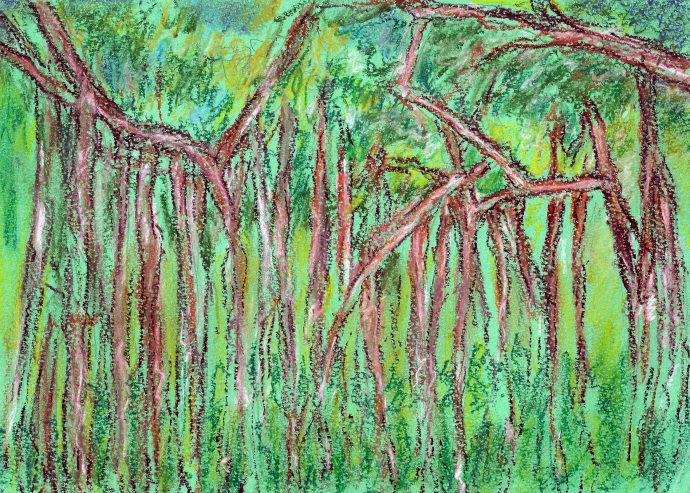 I used oil pastels on tinted papers for these two paintings. 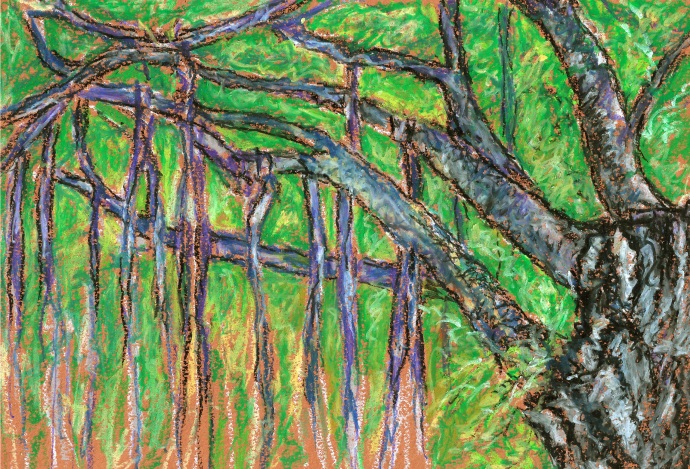 I have used the negative space to suggest the undergrowth of ferns in this painting. 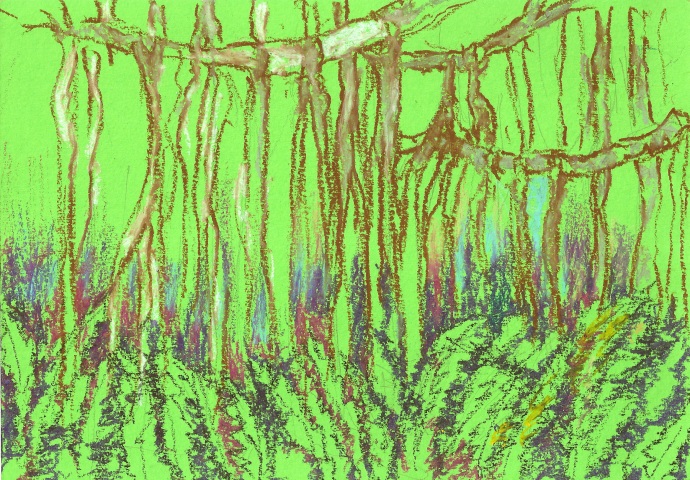 I am an Urban Sketcher