He is from Bihar and has tried his hands at various jobs in Chennai. He has worked as a table cleaner in a restaurant, has worked at a paan shop outside a large hotel, worked in a chaat shop where he learnt the art of mixing spices. All his jobs kept him long hours at work, and that made him decide to slow down a bit. He wanted to start a business of his own that would call for very little investment and give him lot of time to loiter and laze about. He pooled in his little savings and bought the cart that  serves as his workplace and shop.  He thus became the popular paani puri man in the neighbourhood.

His morning is not rushed. He gets up late and spends a couple of hours getting ready the potatoes, spiced paani,  tamarind and mint chutneys . He has a bath at two in the afternoon, tucks wads of paan in his mouth and leaves for work humming a popular Bollywood song. He wheels in his shop at about three in the afternoon to the gate of the school. He sits on the pavement and chats with the boy who has come to sell spiced peanuts for the school children. A woman spreads her wares of dexterously sliced raw mangoes sprinkled liberally with chilli powder. The business for the afternoon will begin as soon as the school closes for the day. 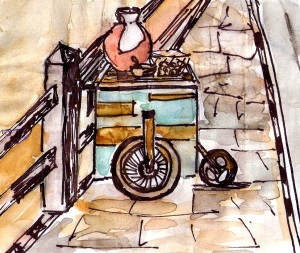 I am an urban sketcher